Monthly Rates as low as: $3.49 for Adults
$2.17 for Children or Grandchildren
Home » Community Involvement » The Spirit Of FC Dallas Special Olympics And Globe Life

The Spirit Of FC Dallas Special Olympics And Globe Life

Globe Life has signed an agreement with Major League Soccer team, FC Dallas, that includes sponsoring the organization's Special Olympics team. This extraordinary group of athletes will play the LA Galaxy Special Olympics team in Texas on August 15th, 2015, then again in Los Angeles on September 26th, 2015. Some of the non-game activities the Olympians will experience include try outs, a signing day where each player signs an FC Dallas contract, team practices, a meet and greet with FC Dallas players, and the trip to Los Angeles. 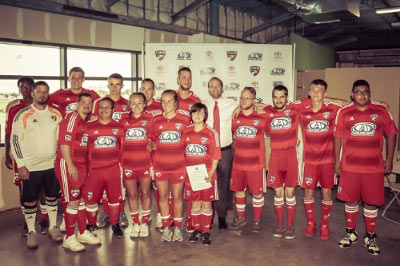 As part of the agreement, Globe Life is also honored to sponsor five FC Dallas Community Soccer Clinics for children and the new #HaveABall program that involves player appearances and pick up soccer games throughout the community.