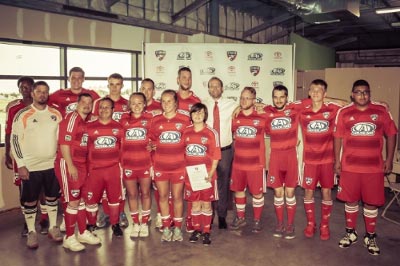 Some of the non-game activities the Olympians will experience include try outs, a signing day where each player signs an FC Dallas contract with owner Dan Hunt, team practices, a meet and greet with FC Dallas players, and a trip to Los Angeles.

As part of the agreement, Globe Life is also sponsoring five FC Dallas Community Soccer Clinics for children and a new #HaveABall program that involves impromptu player appearances and pick up soccer games throughout the community.

“At Globe Life, we believe life insurance is a selfless act. Therefore, we love to support the community through programs like this because it’s simply an extension of what Globe Life and our customers are about — Being Selfless,” added Jones.

About FC Dallas: A member of Major League Soccer since its inception in 1996, FC Dallas is owned and operated by Hunt Sports Group. The professional team plays from March to November at Toyota Stadium in Frisco, Texas. One of the first soccer-specific stadiums built in the United States, the venue plays host to Major League Soccer matches, concerts, international soccer matches and high school football. The 145-acre Toyota Soccer Center also includes 17 regulation-sized, tournament-grade soccer fields and is home to the organization’s nationally-renowned youth development system.

About Globe Life And Accident Insurance Company: Globe Life is the largest issuer of ordinary individual life insurance policies in the U.S. since 2003 (as reported by credit rating agency AM Best based on number of policies). Globe Life was founded in 1951 in Oklahoma City, Oklahoma and is a wholly owned subsidiary of Torchmark Corporation (NYSE: TMK), headquartered in McKinney, Texas. Torchmark’s other insurance subsidiaries include American Income Life, Liberty National Life, United American, and Family Heritage Life. Visit www.globelifeinsurance.com for more information.