McKinney, Texas — Globe Life And Accident Insurance Company (Globe Life) has extended its partnership with the Texas Rangers through 2048 by signing a new naming rights agreement for the future retractable-roof ballpark to be built adjacent to the existing Globe Life Park in Arlington, and located next to the AT&T Stadium (Home of the Dallas Cowboys), and the future Texas Live! entertainment district. The new home of the Texas Rangers will be named Globe Life Field and is scheduled to be completed by April 2020.

"We are thrilled to continue as the Official Life and Health Insurance Company of the Texas Rangers," said Bill Leavell, President and CEO, Globe Life Direct Response. "We've seen positive results from our Globe Life Park partnership. It's extremely exciting to be a part of the game plan for Globe Life Field and to continue supporting the outstanding work carried out for children through the Texas Rangers Baseball Foundation. On behalf of our 1,500 McKinney-based employees and nearly 400,000 Texas policyholders, we look forward to the opening of Globe Life Field's state-of-the-art facility." 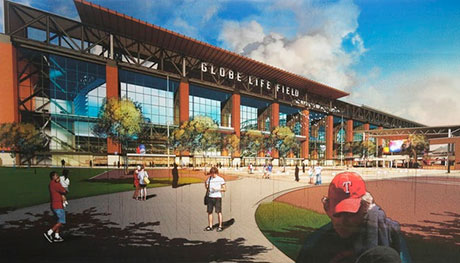 "Globe Life has been an outstanding partner over the last four years, and the Rangers are excited that this relationship will continue long into the future," said Ray Davis, Texas Rangers Co-Chairman and Managing Partner. "We thank Globe Life for their commitment as the naming rights partner for the beautiful new Globe Life Field and for being a leader in its community efforts with our youth."

In November 2016, the indoor facility at the new Texas Rangers MLB Youth Academy at Mercy Street Sports Complex in West Dallas was named the Globe Life Training Center and will include a nearly 39,000 square-foot facility housing fields, weight and training rooms, and classrooms. Globe Life has additional sports partnerships with Roush Fenway Racing to sponsor driver Bubba Wallace in select races in the XFINITY NASCAR series; FC Dallas Major League Soccer team as the supporting sponsor for the FC Dallas Special Olympics Team based in Frisco, Texas; and the Allen Americans minor league hockey team based in Allen, Texas.