6 Things That Happen If You Drink Soda Everyday

Home » Articles » 6 Things That Happen If You Drink Soda Everyday

Soft drinks or soda date back to 1798 when Joseph Priestley invented carbonated water followed by the invention of cola drinks by pharmacists in the 1800s. Since then, the production of soda has become a multi-billion dollar business as people around the world enjoy drinking them every day. In fact, many will confess they are addicted to drinking soda.

According to research, the average American drinks approximately 56 gallons of soda a year. Many people choose to drink soft drinks over water. Although drinking an occasional soda does not necessarily cause health risks, consuming one to two sodas a day can eventually pose some health problems. 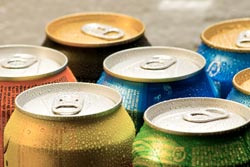 If drinking soda has become a part of your daily routine, you should know about these six health risks: