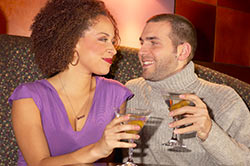 Finding someone you’re truly compatible with, who excites you and is good to you, and who is also single and returns your interest can be hard enough. Add in all of the questionable relationship advice you read in magazines or get from well-meaning friends, and taking a chance on love can seem downright terrifying!

1 – Chemistry is Either Instant or Non-Existent

Whether or not you believe in the idea of love at first sight or not, attraction at first sight is something few would deny exists. But does that mean a relationship is doomed to never get off the ground unless both of your stomachs were doing flip-flops the first time your eyes met? Not at all! Though some couples experience instantaneous physical attraction, the truth is that for many happy couples it takes a little longer.

There are all kinds of reasons why a couple might not feel instant chemistry. Perhaps they met in an unromantic situation, or one of them had a significant other at the time and didn’t fully notice the other until that relationship had run its course. Also, for many people physical attraction just isn’t enough to pique their interest. Instead, it’s the personality of the other person that really draws them in. In fact, true chemistry goes beyond the physical. And it takes some getting to know you time for those kinds of sparks to start flying.

The old stereotype is that women start dreaming of their wedding days when they’re little girls, while men try to dodge as many bullets as possible before settling down. The idea that women are out to “catch” men and “trick” them into committed relationships is a myth that is so often repeated that even women who aren’t interested in serious relationships get accused of trying to “trap” a man. This is, quite frankly, a bunch of baloney.

In reality, both men and women can be commitment-phobic. But it’s a myth that the average man is any less willing to commit than the average woman. The media’s insistence on portraying men as fearful of commitment and women as longing for it might affect the way a couple acts in front of their peers. However, in the end it all depends on those two individual’s desires and expectations. The desire to settle down or not has very little to do with gender.

3 – Once a Cheater, Always a Cheater

Most couples talk at some point about their past relationships. What if during the course of such a conversation your current partner confesses to you that she or he cheated in a past relationship? Is that grounds for an automatic break-up? Or, even worse, what if you find out that your partner has cheated on you? Is there any hope that the promises that it will never happen again are true? Or is the old saying “once a cheater, always a cheater” true?

You may have already noticed a pattern to these relationship myths. That pattern is that while some of them are true for some couples, none of them are true for all couples. The same goes for the myth that teaches that people who cheat will always cheat. There are a lot of reasons people stray including insecurity, immaturity, boredom, and loneliness. The fact is that some cheaters will end up feeling regret and will learn from their infidelities, while others probably never will.

Okay so if you were told that words really are more important than actions you’d probably disagree, right? And most people would be right there with you. So why is it that we pay so much attention to what our partners say in romantic relationships and put so much less emphasis on their actions? We’ve all had that friend who is constantly complaining about the way her boyfriend treats her. He stands her up, forgets their anniversary, and cancels on her every time his boys are in town. But when you ask her why she puts up with it she says “well, he says he loves me”.

On the other hand, you may be in a relationship with a great partner who treats you wonderfully but has yet to drop the L-word. Because this person hasn’t professed undying love yet, you may convince yourself (or be convinced by others) to break up with them, despite how good the relationship actually is. However, actions really do speak louder than words when it comes to relationships. Do yourself a favor and place the most importance on how your partner treats you.

5 – Marriage Means an End to Passion

During the early stages of a romantic relationship couples often literally fall “crazy in love”. That’s because the body produces chemicals that cause intense feelings of euphoria, making it hard for the lovers to think about anything else. It’s not uncommon for both men and women in the early stages of romance to experience trouble concentrating, lack of appetite and even sleep loss. Thank goodness those symptoms don’t last, because if they did falling in love would be hazardous to our health!

Some of those initial giddy feelings, along with the desire to constantly be by your partner’s side, touching, kissing, and cuddling, do fade with time. All of this has led to the myth that marriage means an end to the passion of a romantic connection. It’s true that family and work obligations, kids, and the comfort that comes from a close long-term relationship often mean spending less time staring into each other’s eyes. But that doesn’t mean marriage spells out the end of romance. Couples who care for and respect each other, who make time for each other, and who continue to work on their relationship after saying “I do” can actually experience even more passion in later years as their love deepens.