Rosacea is a common skin condition that affects approximately 16 million Americans with even more than in temporary remission. Rosacea usually first appears in middle age, although people of any age can be affected. The National Rosacea Society reports that 70 percent of those with rosacea have indicated having rosacea has lowered their self-esteem and self-confidence.

Rosacea often appears as having a red or flushed face, but there can be many other symptoms as well. The following are some types of rosacea: 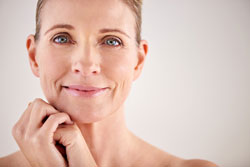 Many factors can contribute to rosacea, like stress, sun exposure, alcohol, exercise, hot drinks and meals; but they don’t actually cause rosacea. Rosacea is usually passed down genetically and is common among people with fair complexions.

Although rosacea causes very sensitive skin conditions, many people typically find themselves using topical creams and lotions that only cause more redness and make the symptoms worse, instead of addressing any potential underlying problems. There are medical treatments that can effectively help people who suffer from rosacea, but there are also ways to treat it naturally. The following are some general suggestions on how to treat rosacea naturally:

As with anything else that concerns your health, you should always consult your healthcare professional with any health concerns. The skin is the human body’s largest organ so it’s critical to address anything out of the ordinary with a doctor.