The popularity of organic food has multiplied over the past two decades. Why? One of the most popular reasons is the belief that the use of pesticides on conventionally grown produce is harmful versus organically grown produce. Organic is perceived as pesticide-free. However, this may not be totally accurate.

According to studies, Rotenone, a pesticide that is allowed in organic farming, is far more toxic by weight than many synthetic pesticides. The U.S. Environmental Protection Agency (EPA) sets exposure limits for the amount of a chemical that individuals can be safely exposed to every day without side effects. The EPA has determined that the amount of Rotenone that people should be exposed to is no more than 0.004 milligrams per kilogram of body weight per day. In comparing this amount to some of the well-known, more toxic synthetic pesticides, for example, Glyphosate, (otherwise known as Roundup) the EPA recommends 0.1 milligrams per kilogram per day, which means it’s 25 times less toxic by weight than Rotenone. 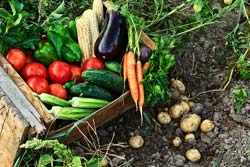 Everyone wants to provide their families with safe, harm-free food. Deciding whether to buy organic or conventional is an ongoing debate. Research shows the toxic danger is in the amount of pesticides consumed. Whether fruits and vegetables are raised organically or conventionally, there can be traces of pesticides. Therefore, it seems reasonable to worry less about whether or not food is organic, but instead make sure your family is eating the right amount of fruits and vegetables needed daily and that you’re buying them from a reputable source.