Is Whooping Cough Making A Comeback

According to research, whooping cough, also called pertussis, is reportedly making a comeback after being almost absent in North America, and is on track to have the highest reported cases in the U.S. in fifty years. This increase could be due to better capabilities to track cases more accurately than in the past. 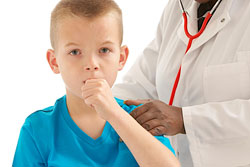 Whooping cough seems to also be making a comeback, because the vaccination tends to wear off. Immunity to whooping cough does not last forever and most adults do not receive boosters, subsequently spreading the disease without even being aware that they are carrying the highly contagious bacterial infection. Whooping cough is then passed on to vulnerable babies who are too young to get the vaccination. Babies are unable to get their first vaccination for whooping cough until they are two months old. Until babies have at least three doses of the whooping cough vaccine, they can be defenseless to the infectious disease.

It can easily be confused with cold or flu-like symptoms. The following are indicators that a child may have whooping cough and you should seek medical attention immediately as it can be very dangerous, especially in babies younger than six months:

Children with whooping cough should be watched very carefully, as coughing spells could cause them to stop breathing. For this reason, it is extremely important that you protect your child by making sure that any older children and adults around your infant have received the pertussis vaccination.