The Difference Between Power Of Attorney And A Living Will

There comes a time for every senior when it’s necessary to plan for things like final expenses or for younger adults to help their loved ones with final planning. It is important to know what choices to make that will give you and your family members peace of mind. Making those plans now and choosing the right legal documents will ensure that your wishes are carried out even if you are no longer able to make important decisions regarding your estate or your healthcare.

One of the basic legal documents that you may be interested in obtaining is called a power of attorney, also called POA. A power of attorney is a document that states who is legally allowed to make decisions if a person is no longer able to act on their own behalf. The document can allow the appointed person to handle financial matters like paying bills, signing checks, banking, or managing a business or investments. There is more than one type of POA, including both financial and medical. 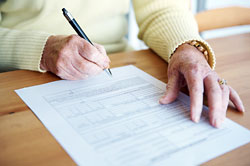 Families should prepare these legal documents long before they are needed. At the time of the signing, the senior establishing a power of attorney must be capable of making the decision. For example, people in late stages of Alzheimer’s disease may not be able to appoint a POA.

If you’re helping a senior family member with their estate planning or even doing your own, you can also consider a living will. It can give guidance to family members and healthcare professionals if a person can’t express their wishes on their own anymore. Without a document outlining those wishes, family members and doctors are often left to guess what a person would prefer for medical care. This could end up in disputes and even courtroom battles.

Many states have forms for advance directives, allowing residents to state their wishes in as much or as little detail as they’d like. For example, it’s common to direct that care to decrease pain and suffering should always be administered, but that certain extraordinary measures, like resuscitation not be used.

To be valid, a living will must meet state requirements regarding notarization or witnesses. A living will can be revoked at any time. The document can take effect as soon as it’s signed, or only when it’s determined that the person can no longer communicate their wishes about treatment.

The living wills are often used in conjunction with the durable power of attorney (DPOA) for healthcare. In some states both documents are combined into one. A DPOA appoints someone to carry out the wishes about end-of-life treatment that are written down in a living will or a medical directive.

Any authority granted by a living will ends when the person who made the document dies, with the single exception that some living wills or powers of attorney give healthcare agents the power to make decisions very soon after death.