Risks of Dying from Cancer

After heart disease, cancer is the second leading cause of death in the United States. The American Cancer Society suggests there were an estimated 1,735,350 new cancer cases and 609,640 deaths in 2018. With breast cancer being the most common form of cancer in women, and prostate for men, the lifetime risk of developing cancer in the United States is almost 40%, or one in three Americans.1 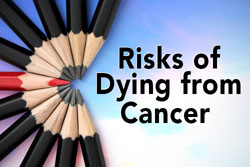 However, by knowing some basic research and statistics, Americans can help reduce the odds of developing and dying from cancer.

Fortunately, the rate of death from cancer in the United States continues to decline among both men and women. According to the American Cancer Society, the lifetime risk for each gender developing various cancers can be seen below.

The Surveillance, Epidemiology, and End Results (SEER) program developed by the National Cancer Institute (NCI) collects and distributes cancer incidence and survival data from registries all over the United States. According to SEER, from 1991 to 2015, the overall cancer death rate in the United States decreased by 26% or 2.4 million lives.

When looking at the fight against cancer, death rates are the best measurement as they are less affected by detection practices than incidence and survival. The highest peak of cancer deaths occurred during the tobacco epidemic in the 1990s with 215 deaths per 100,000 people.1 Since then, society has seen a significant reduction in adults who smoke as well as improvements in early detection and treatment. This progress has translated into more than 2.3 million less cancer deaths from 1991 to 2015.2

The Future of Cancer

The future of cancer prevention looks more hopeful than it has ever before. The Memorial Sloan Kettering Cancer Center (MSK), the world’s oldest and largest private cancer center, has taken a deeper look into five promising advances that may change our outlook and treatment on cancers.

What Can You Do?

The American Society of Clinical Oncology (ASCO) states “researchers estimate that 50% of cancer cases and deaths in the United States could be prevented if people adopted simple, healthy lifestyle choices.” These choices can include:

Upon a cancer diagnosis, a patient probably wants to visit the best doctor...but what about a financial advisor? Cancer is expensive. There are two questions that need to be addressed when dealing with cancer treatment: Does the patient have health insurance? Does the patient have money in savings for deductibles and other out-of-pocket expenses?

Cancer could bring financial toxicity. Unfortunately, it’s not uncommon for cancer patients to drain all their accounts, file for bankruptcy, or even lose their house.

Insurance May Not Be Enough

The 2017 Employer Health Benefits Survey conducted by the Kaiser Family Foundation and Health Research and Education trust found 57% of employees with individual insurance plans had an out-of-pocket maximum more than $3,000 in 2017.

For many insured and uninsured people, the cost of cancer can be catastrophic so much so that they skip or delay treatments. Many patients can’t continue to work which means no income. Those who have insurance and a job that has paid sick time could still be affected by financial toxicity by running out of sick time or having to take unpaid medical leave.

The Importance of Supplemental Cancer Insurance

Supplemental cancer insurance is meant to bridge the gap between what a patient’s insurance pays and what the patient must pay out of pocket. These expenses could include:

Additionally, supplemental cancer insurance can cover non-medical treatments such as:

Among many other things, the burden of cancer is mentally, emotionally, and financially draining. As cancer claims more and more lives, researchers and scientists have dedicated their lives to finding intelligence, treatments, techniques, and cures that will stand for the fight against the disease. Society is more hopeful now about the progression of cancer cures than ever before. We’ve learned many habits and things to avoid to help reduce our risk of cancer. With all the advancements and discoveries, we’re more prepared for the fight against cancer than ever before. 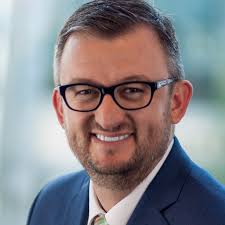 Corey A. Jones is Globe Life’s Senior Vice President of Branding and Digital Marketing. He has worked in the insurance industry for nearly 20 years. In addition to holding a degree in Organizational Leadership from Southern Nazarene University, he is also a Fellow of the Life Management Institute through LOMA, an international education and trade association for insurance and financial services.
Connect: