Tips On How To Prevent E.coli

Home » Articles » Tips On How To Prevent E.coli

E.coli has become the most studied organism and more than 700 strains of the bacteria have been found. Although most strains are not deadly, they can make you sick and uncomfortable if you contract the infection.

The E.coli bacteria often reported in the news when found in contaminated food and beverages are a strain called Shiga toxin. The Shiga toxin, which is the most prominent of the E.coli, is responsible for at least 100,000 illnesses, 3,000 hospitalizations and 90 deaths annually in the United States.

There are ways, however, to protect your family from these bacteria that can cause such severe illness in humans. 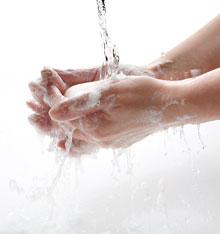 Although there have been many years of research on E.coli infections, there is still no definite medical treatment to cure or prevent E.coli. The best defense is to be diligent in keeping cooking areas sanitized and hands clean when cooking, as well as making sure food is cleaned and cooked thoroughly.