Scams are getting more and more sophisticated and unfortunately, seniors are an easy target for people looking to take advantage. In fact, it is estimated that fraudulent scammers cost seniors approximately $3 billion dollars a year. One of the best ways to protect seniors from getting scammed is to be diligent and knowledgeable about how scams work and how to avoid them. 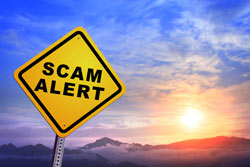