The Importance Of Keeping Seniors Hydrated

Every summer and in between, it’s important to be cautious about staying hydrated. Even mild dehydration has strong effects on the body and can cause many health issues. It is especially important to watch for signs of dehydration in elderly people. The human body is composed of 70 percent water and when that water percentage is lost in an elderly person, it can be life threatening.

Dehydration in senior citizens is common and occurs when the body has lost too much fluid and electrolytes. Dehydration can start out mildly with symptoms including dry mouth and thirst, but if water is not consumed frequently, it can be extremely dangerous. 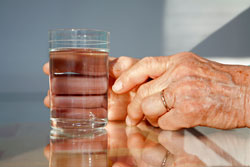 Some medications that senior citizens take can also cause dehydration, such as diuretics or laxatives. Dehydration can also be caused by medical problems including diarrhea, vomiting, heat stroke, high blood sugar and infections.

It may actually be difficult to see a sign of dehydration in your elderly loved one until the dehydration becomes severe. Some of the signs to look for are thirst, although some elderly have a decreased sense of thirst when they are dehydrated, confusion, irritability and poor skin elasticity.

Clouded thinking in the elderly can often be mistaken for as something normal. However, if the confusion becomes suddenly severe and they are unable to make the simplest of decisions, it is a red flag they may actually be suffering from dehydration, or even a urinary tract infection.

Other signs that your elderly loved one may be suffering from dehydration is unusual fatigue and sluggishness.

Making sure your senior loved one is drinking adequate amounts of water also minimizes the risk of urinary tract infections, which is often a common medical problem in the elderly. When seniors do not get enough water, it can cause toxin buildup, which can cause muscle and joint pains leaving your elderly loved one feeling a lot of discomfort.

Fluids in your body also act as natural lubricants for your joints. When someone becomes dehydrated, they may feel increased bone and joint pains, as well as muscle soreness and cramping.

Nursing home facilities or assisted living centers will often monitor the urine output in senior adults to help them detect dehydration. If a decreased amount of output is noticed, they can be treated early to avoid dehydration. Educating senior adult care providers on how to watch for dehydration in the elderly will go a long way in the prevention of any illness caused by dehydration.

Drinking adequate amounts of water is the easiest way to prevent dehydration. Many liquids can actually cause dehydration, such as tea, soda, coffee and alcohol. It was previously thought that eight or more glasses of water was needed per day to stay sufficiently hydrated, but according to a study performed in 2002 by the American Journal of Physiology, there was not adequate evidence showing that a large amount of water must be consumed in order to stay healthy.

Ensuring that seniors are hydrated, especially during the hot summer months, will save them from the dangers of dehydration and illness that can be caused due to lack of fluids.