According to a report from the AAA Foundation for Traffic Safety, the amount of accidents per mile steadily increases as drivers 65 and older continue aging. Other than teenage drivers, seniors that still drive at age 80 and older are rated the highest among those involved in car fatalities. Studies show that because seniors have more frail bodies, they are not able to endure the affects from a car accident.

Deciding you should stop driving or telling a senior driver they should stop can be a difficult task. Many experts agree, however, that urging a senior adult to stop driving does not need to happen until you are convinced they are no longer able to drive. Research has shown that being an older driver does not necessarily mean you have poor driving skills. In fact, according to the National Highway Traffic Safety Administration’s Older Driver Research Program, senior drivers cause fewer motorist and pedestrian deaths than any other age group. 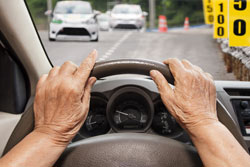 Studies show that seniors are actually more responsible behind the wheel and more likely to wear their seat belts. They are also less likely to drink and drive. Since seniors drive less than younger drivers, they are less likely to be involved in vehicle accidents.

Giving up driving can be hard for some seniors. They often feel like they are giving up their freedom and independence. It can be an emotional transition not only for driver, but also for the children or caregivers.

The following are five red flags that may warrant seniors giving up their keys and allowing someone else to drive for them: