Nothing is quite like the experience of falling in love. During the beginning of a romantic relationship you may feel like you’re walking on air. Everything your loved one does seems endearing. But as the months and years go by, reality sets in. You get to really know each other. And sometimes this means learning things about your significant other that aren’t quite so endearing. 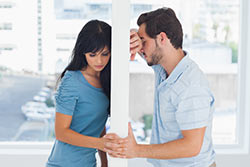 Figuring out who your partner really is and accepting his or her faults (within reason) is part of forming a true bond, the kind that will last long after the newness of the romance has worn off. While moving on from the “crazy in love” stage is natural and, in general, healthy, some couples don’t make it much farther. In fact, these 7 common relationship deal breakers have put the nail in the coffin of all too many romances…

The idea that couples quarrel over money isn’t too shocking. But just how much of a deal-breaker money management can be might surprise you. Disagreements over money is one of the top reasons couples end up divorcing. Also, couples who have disagreements over finances early on in their relationship are more likely to break up.

Arguments over finances are usually more intense and tend to go on longer than other types of disputes. Often, couples who fight over money have incompatible spending habits. Over time, these differing views and habits can cause the couple to call it quits.

Each person comes into a new relationship with their own set of preconceived notions about what a relationship should be like. But just because two people have chemistry, this doesn’t mean that their morals and values match up. In fact, often the ugly surprise is that the person you are falling for sees things very differently.

When two people don’t agree on a definition of what it means to be faithful, this is a true deal breaker. This is why it’s a good idea to bring this subject up as soon as you know the relationship is going somewhere. After all, isn’t it better to know in the beginning if your partner’s morals match your own?

Conflicting belief systems can lead to serious disagreements in a relationship. This can mean religious beliefs, cultural beliefs, and even general beliefs concerning what’s right and wrong. Most people feel that it is highly important to them for their partner to share the same or similar values and beliefs.

Modern families often consist of couples with different religious or cultural backgrounds. Getting to know and understand the beliefs of a partner with a different background can be exciting and enriching. Many couples have made this work beautifully. However, for some couples, conflicting belief systems can be a deal breaker.

You fall in love with a person. But once you commit to a serious relationship or take it all the way down the wedding aisle, you’re really connecting yourself to more than just one individual. Being in a long-term relationship commonly involves significant interaction with each other’s families and forming close relationships with them as well. But what happens when your partner doesn’t get along with your family or you don’t get along with your partner’s loved ones?

Conflict can arise for a variety of reasons. Maybe you have different values, or practice different traditions, or just have personality clashes. Just because you and your partner are a match, doesn’t mean you’ll see eye to eye with his or her siblings, or parents. Some couples work through these issues. Others shrug and decide that conflict with each other’s families is a necessary evil. But many couples will end up breaking up if one or both families disapprove.

It’s not just the approval from families that people seek when it comes to their relationships. Most men and women would prefer that their significant other and their friends got along. People of both sexes seek out advice from their friends in the early stages of a relationship. While not everyone will break up with someone just because a friend disapproves, we all like to know what our friends think of the person we date.

What happens when one friend disapproves of your partner? Depends on the friend and the person! If it’s a best friend, both men and women are likely to consider the advice. After all, your friends know you perhaps better than anyone else, right? But if the majority of a person’s friends openly disapprove of that person’s partner, this can often lead the couple straight to splits-ville.

In order for a relationship to work, you have to be on the same page. This means a variety of things. But it is particularly difficult to make a relationship work when one (or both) partners have commitment issues. It might just be that you’re moving at different paces. Some people take longer to open up. But this can be frustrating for the partner who is prepared to fully commit. Some people will get tired and choose to move on instead of waiting for the other to commit.

It’s one thing when a person tells you straight up that they fear or don’t want commitment. At least you know where you stand. But some people don’t even realize they’re commitment-phobic. These types will eagerly enter into serious relationships, and may even make promises about the future. But when the time comes to fully commit, they’ll find a way to stall or run away. Fear or refusal to commit is a major relationship deal breaker.

Absence makes the heart grow fonder… or so they say, right? While this may be true, there is no denying that long-distance relationships come along with their own set of challenges. Phone calls, emails, and text messages are helpful, but they can’t take the place of hugs, kisses, and face to face conversations. In short, these types of relationships aren’t for the fickle, the easily-bored, or the impatient.

Some people enjoy the anticipation of waiting for the next visit. And it’s true that the excitement of each reunion can help to keep the passion in a relationship going strong. But not everyone can handle long-distance. It takes additional work, and some people just aren’t up to the task. Many couples survive and even thrive in long-distance relationships. But for many more couples, this becomes a relationship deal-breaker.