Financial Benefits Of Co-Habitation vs Marriage

Couples cohabitating in the United States rather than marrying first, has become a normalcy for young adults between the ages of twenty to forty. Living together has actually increased nearly a thousand percent since 1980 and the marriage rate has dropped more than forty percent since 1960.

Further statistics showed that during that between 2006 and 2010 almost half of women between the ages of 15 and 44 (48 percent) lived with a partner before getting married. 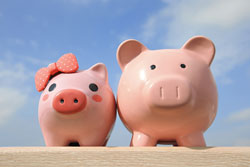 An increasing number of couples over the age of 45 are also choosing to live with their partner rather than get married. Many in this age group are choosing to stay unmarried due to financial reasons as well. They will not be obligated to pay for any medical bills that their partner may incur, and they can avoid any inheritance issues that may develop if one or both partners own a substantial amount of assets or have children from a previous marriage.

Older couples may also choose not to marry so they are able to apply for public assistance, such as Medicaid, in order to pay for medical bills without burdening their partner. However, one of the most common reasons older couples are choosing to cohabitate rather than marry is to avoid joint liability that debt can bring.

Although there are many financial reasons to cohabitate, there are also some important benefits to think about for those couples who choose to marry. One is being able to save on the expense of health, dental and vision insurance by participating in your spouse’s health insurance plan. Many times company provided insurance plans for an employee and a spouse are less expensive than for couples that have their own individual plans. This is especially true if a partner is self-employed and doesn’t have employer-sponsored insurance.

There are also extra benefits that married couples may be entitled to that cohabitating couples miss out on, such as lower car insurance costs for married couples. Being able to file a joint tax return as a married couple rather than filing two separate tax forms may also give you one less thing to worry about, as well as being a nice benefit.

As a married couple, it is also easier to qualify for larger loans with better terms assuming that both of your credit scores are in good standing. However, if your credit score is not the best as a single person, it will get a boost by marrying someone with a better credit score than you. On the other hand, your partner’s credit score could take a hit when the scores are combined, since yours is lower.

You may also want to think about the importance of marriage when thinking about retirement, since only a legally married spouse is entitled to receive Social Security benefits due following the death of a retired partner.

Whether or not you choose to marry or simply live together, financial security can only be obtained if both partners are willing to practice good financial principles and to not spend more than you have.