If being single in your thirties wasn’t part of your original plan, don’t worry. It is often the best things in life that aren’t planned. It’s time to cut through all the hype surrounding being thirty-something and single, because while some movies, TV shows, and magazines eagerly depict the plight of the single thirty-something woman, many of those women are having the time of their lives. Here are some of the best things about being single in your thirties... 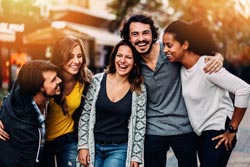 Remember, life experiences make you wiser and less willing to compromise what you really what. Use that to your advantage and you’ll enjoy being single in your thirties, maybe even more than you thought possible.