Shocking Food Facts that May Change the Way You Eat

Has anyone ever asked, “Are you a hamburger with a large side of fries”? No? If you are what you eat, then perhaps the answer is yes. Feeling a bit guilty? Don’t feel bad, you’re not alone.

Even if you rarely eat fast food, if your diet is like the majority of Americans, it’s full of fattening, processed foods that aren’t the best for the heart or waistline. There is a great deal of conflicting information concerning diet and health, but there are also some shocking food facts that may change the way you eat forever. 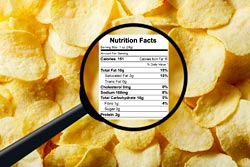 Have you ever felt like you couldn’t eat just one? Perhaps you can eat just one serving of your favorite snack food, but most people don’t buy a small bag of potato chips with the intention of having it last for two or three snacks. Those tiny bags of chips rarely fill you up but they pack a caloric punch. The average serving size is about 11 chips. If you have 3-4 servings per bag and each serving is 200 calories, it adds up fast.

It’s not just chips. Serving sizes on many packages can be misleading. An item can look like it’s low calorie at a glance until you discover the actual serving size is small. For example, there are usually two servings in just one small can of soup. But how often do you make a can of soup and just eat half of it? The same often goes for serving sizes on everything from cereal, to cookies, to instant mashed potatoes. So next time you reach for your favorite snack food, carefully read the calories per serving and the serving size to calculate just how much you’re actually taking in.

Did you know the “5-second rule” is actually legit? Whether it involves a kindergartener dropping a cookie at recess or someone dropping the last hamburger at the barbeque, we’ve all heard someone bring up the 5-second rule. According to this 5-second rule it’s perfectly safe to consume food that has been dropped on the floor, so long as it’s picked up within 5 seconds. Whether or not it’s a fact that dropped food is really safe has always been debatable, but a new study sheds light on the subject.

According to a study done at Aston University, people that would rather risk it then waste food might have been right all along. Researchers tested a variety of different foods on surfaces from concrete, to tile, to carpet to see just how much harmful bacteria such as Staphylococcus and E. coli actually attach to food items within certain amounts of time. They discovered the amount of bacteria that attaches and how long it takes can depend on the type of food and the surface it’s dropped on. For example, wet food attracts more bacteria and carpet is a safer surface. However, what it all boils down to is that most food doesn’t become dangerous if it’s only touched the floor for a brief amount of time.

Another shocking food fact is that the meat might be full of fat, even chicken. A recent study conducted by the Institute of Brain Chemistry and Human Nutrition at London Metropolitan University found that chicken today has less protein and more fat than it did 40 years ago. According to the study, the average chicken has 33 percent less protein and more than 200 percent more fat than the average chicken did four decades ago. It isn’t just chickens that are becoming less healthy for humans to consume.

Factory farming often means animals are raised in cramped quarters and fed diets that aren’t natural. The result is that cows, pigs, chickens and other animals raised in factory farms have more fat and less protein than if they were raised in a more natural environment and given a natural diet. You may also miss out on healthy nutrients like vitamin E and omega-3 fatty acids if you only eat meat that has been factory farmed.

Have you ever wondered whether or not the dyes in your food were safe? Did you know that food manufacturers often add dyes to food to change the way it looks? Why do they do it? Because these artificial dyes are often more appealing to the eye than natural colorings. Artificial dyes may be doing more to your food than just making it a more appetizing color. Some of the chemicals found in dyes have been linked to hyperactivity in children.

Yellow No.5 and Yellow No.6, two dyes still found in food items today, have been connected to hyperactivity in children according to recent studies at Columbia and Harvard University. Researchers found that children who consumed food and drinks containing these dyes experienced significant increases in hyperactivity compared to children who did not consume foods with artificial dyes. The FDA has already banned several artificial food dyes connected with negative side effects in consumers.

Additionally, “no trans fat” labeled foods often contain trans fat. Trans fats or trans fatty acids are created when hydrogen is added to liquid vegetable oils to make them more solid. Trans fats raise your LDL (bad) cholesterol levels and may increase your risk of stroke and heart disease. Eating foods with trans fatty acids can also raise your risk of developing type 2 diabetes. According to the American Heart Association, it is wise to limit consumption of trans fatty acids to less than 1 percent of your total daily calories. Since trans fats naturally occur in meat and dairy foods, most people have no room left in their diets to take in additional trans fats.

Avoiding foods with trans fat is a healthy choice many consumers make, but no matter how much you might try to avoid it, you may still be consuming it inadvertently. That’s because the government allows food manufactures to round anything less than 0.5 to zero when it comes to counting trans fat. Although 0.5 doesn’t sound too high, once you start adding up the fat from several servings and several different types of “trans-fat-free” foods consumed in one day you may actually be taking in quite a bit more than you think.