The blood, the sweat, the tears, the thrill of victory and the agony of defeat — who knows the extremes involved in competitive sports better than an Olympic athlete? When modern Olympic athletes take the stage, they stand in a long line of competitors who have gathered to participate on an international stage for the glory of representing their country and bringing home the gold.

Ancient Greeks held the first Olympic Games in 776 B.C. on the plains of Olympia. The games continued for almost 1200 years before they were banned, only to be officially revived with the Modern Olympic Games in 1896. Despite glory that can be gained through winning a bronze, silver, or gold medal for your country and the hard work the athletes do to train to be the best, not all Olympic sports have lasting power. There are actually some strange, popular or downright dull sports that have been cut from the Olympics. 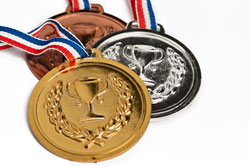 One strange sporting event was pistol dueling. When most people think of pistol dueling they think of cowboys in the Wild West or sharply dressed gentlemen defending someone’s honor. Believe it or not, pistol duels were once a part of the Olympic Games. Not one drop of blood was spilled however, as the duelers actually shot at dressed up dummies, not each other. It may sound exciting but pistol dueling didn’t last long. It appeared at the 1906 games in Athens, but those games weren’t officially recognized and pistol dueling never made its way back to the Olympic stage.

Ever wondered what ice hockey would look like without the ice? Roller hockey made it onto the Olympic stage in the summer of 1992 as a demonstration sport. Twelve countries competed in a single event that was men only. Roller hockey differs from the more popular in-line hockey in that the former is played on quad skates while the latter is played on in-line skates. While roller hockey never made it into the Olympics again, there are still some social media groups that promote its possible inclusion in future games.

Most people have less than fond memories of rope climbing in school. It’s a difficult task that requires skill and athletic ability. Rope climbing was once a sport for athletes to compete for a Olympic gold medal. First, climbers had to race up a 45-foot rope. Only two competitors ever reached the top, so the rope had to be made shorter. Rope climbing left the Olympics in 1932 with hardly an argument.

More than a century ago, Paris replaced the clay pigeons Olympic shooters typically used in competitions with real ones. In 1900 at the Olympic Games in Paris, live pigeons were used as part of a shooting competition that required live targets. Though there is debate as to whether or not live pigeon shooting was ever a full Olympic event, live birds were a part of the games that year with Belgium’s Leon de Lunden killing 21 birds to take the gold.

The Olympic Games of 1900 coincided with the Great Exposition in Paris. That year, hot air balloon pilots competed as part of the Olympic Games and were judged on how far they traveled, how long they remained in the air and their ability to land their balloons at predetermined spots. Hot air ballooning was removed from the Olympic Games later on due to a motorized sports ban. Even without the ban it’s hard to imagine a sport with such cumbersome equipment making it onto the Olympic roster again.

The same Paris Olympics that debuted shooting live pigeons and hot air ballooning included a 200 meter swimming event that involved swimming around obstacles. In order to complete the course the twelve swimmers who competed had to climb over a pole and then a row of boats. Next, they had to swim under another row of boats. Just five nations were represented in this strange Olympic event which was only held that one year.

Tug-0f-war was an Olympic sport for two decades. Also debuting at the 1900 Paris Games, tug-of-war was played with eight men on each team. According to the official rules of Olympic tug-of-war, the first team to pull the opposing team six full feet would be declared the winners. While it must have been entertaining to watch, it was cut from the games and hasn’t appeared in them again.