Relationships can take work, some more than others. Even the most compatible couples disagree sometimes. Disagreements can easily turn into arguments and fights, especially if people are stressed out. Repetitive fights can lead to resentment and communication problems, putting relationships at risk. Healthy disagreements, on the other hand, can lead to mutually pleasing resolutions that can strengthen relationships and help couples grow together.

There are so many reasons behind couples’ arguments, just beware of the relationship killers that can destroy partnerships if people aren’t ready to deal with them effectively. 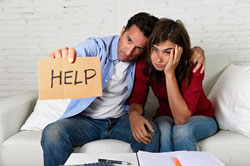 One of the most common things couples fight about is money. For richer or poorer is even a part of traditional wedding vows, but most couples may not truly understand the significance of that statement. As time passes and financial obligations grow, fights over bills and money management strategies can really put those vows to the test. Many married couples fall apart because they can’t stop arguing about money. You don’t have to be married to fight over finances either. Couples who live together also argue over shared bills and even couples who live separately might debate over how money is spent.

Debt, spousal spending and personal spending are what cause most money arguments. Merging money into joint accounts can cause more arguing, especially if one partner is a saver and the other is a spender. Keeping some accounts separate can help. This way, the saver feels more financially free and the spender learns to handle money better. In addition, separate accounts mean more privacy and less conflict. The best way to avoid fighting over money is to remain as debt free as possible.

Arguing over responsibilities at home can kill a relationship too. In the 1960s a shift occurred in the expectations of men and women and their roles in a marriage. Prior to that time it was taken for granted that a wife would care for the children and do the housework while the man worked outside of the home. Now women make up a large part of the workforce and more women than men are graduating from college. With many households having dual incomes, the question of who does what housework has become a major issue for many couples.

Some couples argue daily over household chores. Usually one partner they are doing more and will resent the other for not helping. The other partner may get angry and feel nagged. Partners often have different standards of what clean really means. Over time the nagging and resentment add up. Try to communicate openly from the beginning and come to an agreement about who should handle which chores.

In the beginning of a relationship affection comes easily and naturally. As time goes on, however, a decrease in intimacy and affection can become a major source of conflict for many couples. If unresolved this can be a relationship killer.

Lack of intimacy and affection often means there is an underlying issue in the relationship. Some people struggle with showing their emotions no matter how much they care for their partner. This can lead to arguments and hurt feelings. If you and your partner once shared affection easily, try to figure out if another issue is affecting your ability to relate to each other intimately. If you determine there isn’t an underlying problem, you might seek the advice of a doctor or therapist.

Shakespeare famously called jealousy “the green-eyed monster” to imply how dangerous it can be. It can destroy trust faster than a couple can build it. It makes rational people lose their tempers and give in to fear and doubt. When someone feels jealous, fights can break out. Jealousy may arise over a perceived or real threat. In reality, jealously is a very destructive emotion that creates negative feelings like anger, helplessness and inadequacy. Positive emotions, like trust and respect allow couples to secure their foundation. Don’t go out of your way to make your partner feel jealous. If you want attention, find a positive way to get it. If you have a partner who is jealous, odds are it is due to their own insecurities. Be sensitive to that, but don’t encourage jealous behavior.

You love your friends and family for bonds that run deep through a lifetime of shared experiences. Your significant other, however, has yet to establish those bonds like you have. Everyone in your life that comes along with you is part of a package deal your partner may not have bargained for. Friends and family can bring up a score of issues for a couple. Some people feel the need to control who their partner is friends with. Other issues can arise concerning how much time is spent with friends and family, or how much say family members have in the daily lives of the couple.

When families clash it can lead to even more problems for the couple, who might feel their loyalties are being tested. In general, it’s good for couples to maintain strong relationships with their friends and families. Not only does it keep the pair from isolating themselves and depending on only each other, it makes for strong family bonds if the couple has children. If friends or family members purposely try to cause trouble in your relationship out of spite, it needs to be dealt with before it causes damage to your relationship with your partner.

Avoiding arguments altogether isn’t realistic. Avoiding confrontation and disagreement by bottling up emotions is counterproductive. Just because you don’t talk about a problem, doesn’t make it non-existent. If you don’t find a way to fix it, it will continue to fester and cause negative, bitter feelings between you and your partner.

Couples can learn how to avoid fighting and handle disagreements effectively. The key is to communicate openly and regularly about thoughts and feelings. When something bothers you, bring it into the open. If you’re angry, try waiting until you’re calm to discuss the issue. Finally, don’t be afraid to seek outside help if you and your partner are continually arguing over the same things and finding yourselves killing your relationship. Therapists, counselors, church leaders and even books about handling conflict in a relationship are all excellent sources to use to help you learn how to have healthy disagreements with your partner.