It’s been told in stories and shown in countless movies that with the rising of a full moon comes a change in people’s behavior. There are even tales that the moon sends pregnant women into labor or how it is to blame for an increase in emergency room visits, vehicle accidents, aggression and even sleepwalking. But in the real world, can the the moon really affect human behavior the same way it can affect the ocean tides?

Even though it’s easy for people to blame a full moon from erratic behavior, there have been many human behavior studies performed over the years that have simply found no connection between a full moon and people’s behavior. 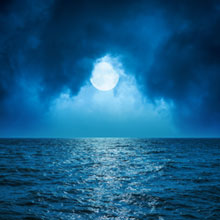 There may not be any real scientific evidence that people seem to go crazy when there is a full moon, but the word lunatic does come from the latin word luna, meaning moon. An article published in the Journal of Emergency Medicine in 1987 claimed that 80 percent of randomly selected nurses and 64 percent of doctors in emergency rooms in unnamed hospitals believed that lunar cycles affect mental health. This article further noted that 92 percent of these nurses believed that they should be paid an extra “lunar pay benefit” during a full moon.

Contrary to this study, however, the American Journal of Emergency Medicine published another article in 1996, indicating that there was no increase in emergency room visits on full moon nights versus any other nights. In addition to this study, the old legend that doctors and nurses botch medical procedures more during the full moon than other nights is also unfounded. According to a study in the October 2009 issue of the Journal of Anesthesiology, researchers found the risks for surgery was the same no matter what day of the week or time of the month surgery procedures were performed.

So, what about the full moon affecting the tides in the ocean? If the gravitational force of the full moon affects the earth’s ocean tides, couldn’t it affect people since the human body is made of 75 percent water? That’s simply not true. The moon and the sun together work to create tides in the earth’s oceans. The ocean on the side of the earth facing the moon will pull toward the moon. This is known as a high tide. A high tide will also occur on the other side of the earth, because the center is being pulled toward the moon.

While the moon’s gravitational force is incredibly strong when it comes to affecting tidal waves in the vast oceans, it does not affect the body. Only in extremely rare cases will the moon even have an effect on some lakes.

Although the moon holds a mystical place in history induced with myths and werewolves, there appears to be no significant proof that there is a connection between the full moon and human biology or behavior.